I found my Nintendo DS Lite. It was hidden among random cables and chargers, next to a stack of MTG cards. 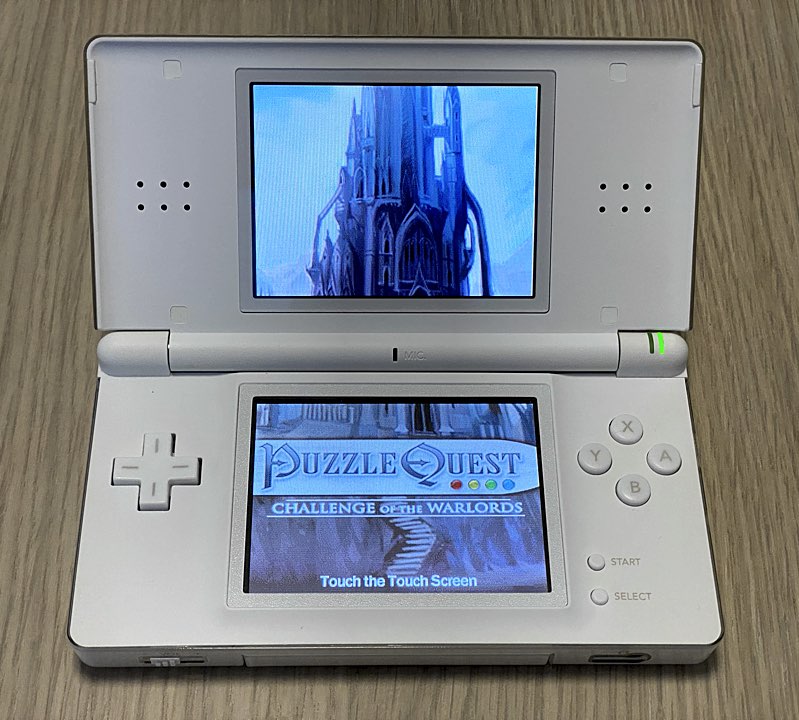 Apart from some yellowing (it's a white model) and a partially peeled-off serial number sticker, it still looks great. To my surprise it also works great! I haven't touched this thing in 10+ years, but the battery charges right up and things seem to work well.

It feels like a nice device. The design is rather sharp-cornered, though, and I do remember having some aching fingers after prolonged sessions. The display hinge has an enjoyable little click/snap as it locks into the open position. The D-pad may have lost some of its sensitivity, but all buttons do work as they should. The resistive touch screen is as numb as ever, but stylus-based interaction does have a delightful precision compared to one's fat fingers. A stylus is certainly necessary given that the screen is so tiny by modern standards.

I never had a large collection of DS games. The cartridge of my favorite one is still in the slot: Puzzle Quest - Challenge of the Warlords. I couldn't resist resuming an old game I had going, and it wasn't long before I could feel its hooks finding purchase.

It's quite a nostalgia trip, all in all. I can see myself spending a number of fun hours with this game again.

🌐A remake of the game has been released for the Switch.

I don't currently have a Switch but now I'm seriously tempted, for this one game alone. It would be even better to have an iOS version, though, so maybe I'll keep playing on the DS and hope that it gets released on iOS eventually.

The original Gemtext version of this page can be accessed with a Gemini client: gemini://skyjake.fi/gemlog/2021-01_dslite.gmi